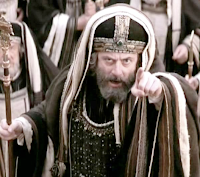 Jesus has unsettled the religious leaders by asking them a question they don't dare to answer because of their pride and fear.  And he's not done with them yet...

The story Jesus tells here is about God, his people and the stubbornness of some who always respond with aggressive doubts like the religious leaders who are listening.

God is the man who works hard in the story to establish the vineyard.  Centuries ago, God had promised Abraham land and descendants that would become a great nation to bless the whole world (Genesis 12:1-3).  God had repeatedly rescued and restored Israel from their enemies, even when it was their fault they were in trouble.  He had tended them like a vineyard and raised them like the perfect loving parent (Hosea 11:1-4).

The servants that get killed in the story are the prophets - God's messengers who were sent to call Israel back to God every time they forgot him.  The prophets were frequently ignored, mocked, beaten and killed and God's heart is broken about this (Matthew 23:37).  Jesus knows that the religious leaders hearing this story have the same stubborn hearts that killed previous prophets and he knows that they want to kill him too.

Jesus is clearly saying that he's the son in the story and the tenants are those who would oppose him.  He's claiming to be the last and only hope for people and he's accusing the religious leaders of opposing God himself.  Jesus even goes as far as to point out that those who oppose him will also kill him and the result will be that God hands over his kingdom family to others who will believe, trust and follow him.

The religious leaders are furious about the story because they understand the accusation all too well.  They're way past recognising their pride problem and are subconsciously set on fulfilling exactly what Jesus' story predicts.  Their anger at what Jesus has said ironically demonstrates that he's right.

In this section of Mark's account, we're seeing that Jesus was at odds with the religious types of his day.  Religion is not always right and religious people are not always good.  Jesus is asking questions and telling stories that are exposing people for who they really are.  And we also get the strong sense that he's only just getting started.  There will be bigger clashes to come.