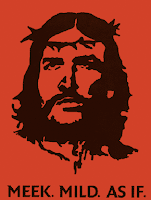 Jesus gets mildly frustrated and then really angry...

Jesus is hungry and I think a little frustrated that there's no figs on the fig tree but this is nothing compared to how angry he gets when there's no prayer in the house of prayer.  At least the fig tree could say it wasn't the season for figs but those who had turned the temple into a market didn't have any good reason for what they were doing.  And Jesus is the angriest we've seen him.

The Bible never says anger is wrong in itself.  When sin is stealing, killing and destroying the lives of others, we are wrong NOT to get angry.  God gets angry and so should we.  It's when and how we get angry that matters.  We can learn six things about the best kind of anger from the anger of Jesus in the temple...

1. Jesus' anger is intense.  He's not just a little bit cross - he's burning with rage!  John's account of this mentions the messianic prophecy: 'Zeal for your house will consume me' (John 2:17).  The intensity of Jesus' anger is directly correlated to the intensity of his love.  In other words - if Jesus didn't care, he would get this angry.  It's the kind of anger that's only possible when you love someone so deeply and they're stubbornly choosing to rebel against your love and harm themselves and others in the process.  Good parents know about this kind of anger.  It's the kind of anger that CS Lewis says love bleeds when you cut it.  Often our anger is inadequate or buried and we should ask: 'Should I be more angry about this?' or 'Should I show my anger more about this?'

2. Jesus' anger is selfless.  Jesus isn't angry about something that only affects him.  He's angry because what should be a place for people to draw close to God in prayer has been turned into a marketplace and people are missing out on God as a result.  He's angry because people's relationship with God is being further lost.  Often our anger is petty and selfish and we should ask: 'Is my anger about me?'

4. Jesus' anger is controlled.  He's aggressive, even violent (with tables).  In John's account of this event, he records Jesus making a whip and using it to drive out the animals (John 2:15).  But we don't get the sense that Jesus lost his temper here.  His actions are energetic and forceful but also deliberate and calculated.  Often our anger is out of control or we get snappy or spiteful with our words and we should ask: 'Am I losing it?'

5. Jesus' anger is effective.  Jesus' anger gets the job done!  The marketplace is turfed out and the temple is free to be a place of prayer again.  What was wrong has been put right.  Often our anger makes matters worse rather than better and we should ask: 'Is my anger helping?'

6. Jesus' anger is attractive.  Immediately after Jesus drives out the buyers and sellers, we read that people are listening to Jesus' teaching and are fascinated.  Often our anger drives people away and we should ask: 'What (or who) is my anger pointing people to?'

So we see Jesus getting angry and it's about a lack of prayer where there should be prayer and connection with God.  Jesus uses the fig tree he was frustrated at earlier to illustrate the power prayer has to change things.  It's not a magic formula that changes everything we want in just the way we want because Jesus is God and not our personal genie.  But prayer is nonetheless a connection with God, who is quite capable of changing things when he chooses to.  Jesus also warns us against holding grudges when we pray because forgiven people forgive people.