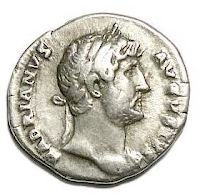 The religious types are riled up about Jesus and are trying to catch him out again but Jesus sees right through their hypocrisy...

The Pharisees and the Herodians would have disagreed on the issue of paying taxes to Caesar and so they're an unlikely tag-team but here we see them co-operating because of their mutual agenda to get evidence against Jesus.  They're not looking to Jesus to solve their problem.  They want to make one!

The question is a tricky one.  If Jesus openly opposes paying taxes to Caesar, the Herodians would be able to accuse him of treason, which could land him in a lot of trouble.  If he speaks in favour of taxes, the Pharisees and the rest of his fellow Jews, oppressed by the Roman Empire, might start to have a serious problem with him.  Either way they're hoping that Jesus will say something to drop himself in it and eventually get himself killed.

Jesus is insightful and he answers the question with another question to expose their motives.  'Why are you trying to trap me?' (v15).  Unlike the religious leaders who are using flattery and dishonesty, Jesus doesn't have anything to hide and so he can speak plainly and get right to the real issue.  He knows they can't and won't answer this question though, so he continues.  By asking about the inscription on the coin, Jesus is getting them to think about God's perspective and agenda rather than their own.  They're more interested in their own position of control than in what God is doing through Jesus.

This is about people's perspective and priorities in this world.  Jesus is saying, 'Let Caesar have his money but let God have you!'  The religious types have largely forgotten about God and Jesus skillfully challenges their priorities.

To what extent is your 'religion' getting in the way of God?  Or to what extent are your priorities preventing you from getting to know Jesus properly?