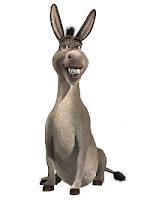 Jesus shows us several key things about himself in this next short section of Mark's gospel...

Again we see that Jesus knows the future.  He accurately describes the whole donkey scenario ahead of time and it happens exactly as he said it would (v2-6).

The arrival of Jesus on a donkey is the fulfillment of a prophecy in Zechariah 9:9 (one of over three hundred ancient prophecies that were fulfilled in Jesus' life).  The mathematical probability of one man in history fulfilling all these prophecies is so close to zero that the only logical explanation is that God knows the future, said what would happen and then did it.

Jesus arriving in Jerusalem on a donkey has significant meaning.  Kings would usually arrive on spectacular horses, armed to the teeth and looking important and powerful.  Jesus arrives in almost laughable humility.  He's a king (the King of kings) but his status is not rooted in human recognition.   And Jesus arrives in peace.  He's not come to make war, but to die.

The cry of the fickle people will soon change from 'Hosanna!' to 'Crucify!' later on but it is also another throwback to Old Testament writings, quoting almost word-for-word from Psalm 118:25-26.  God is doing what he promised and giving plenty of clues that Jesus is the one all the prophecies were pointing at.