9. Who Did Jesus Think He Was?

Jesus, splits history in half (BC/AD).  2000 years after his death, nearly a third of the world claim to be Christians.  More books have been written about him, more songs sung to him, more paintings painted of him than anyone else in human history.

Nearly everyone believes SOMETHING about Jesus.  He's in all the major religions too.  He's simply too big a deal to ignore.  But only Christians believe he is God.

Did Jesus actually make this claim?

You might say, "So what if he did?  Doesn't mean it's true!"  But although others have claimed to be God, they all tend to be dangerous cult leaders or those who are deluded or mentally unwell.  None of them (or anyone else ever), have impacted the world like Jesus.

So we should be curious about what Jesus actually said about himself.

This video is about that...

The vast majority of modern historians, both Christian and non, are convinced that Jesus certainly existed and that his life and words can be investigated historically, just as we would with other ancient figures such as Plato, Aristotle, or Alexander the Great.

Historians, both Christian and non, treat the New Testament records as an ordinary collection of ancient documents to determine the life and words of Jesus.  Here is what they find...

1. Jesus claimed to be THE MESSIAH.  By riding into Jerusalem on a donkey (an event attested to by independent sources), Jesus was decisively and provocatively claiming to be: The Victorious King, Wonderful Counselor, Mighty God, Anointed One, Righteous, Bringing Salvation, Everlasting Father, The Prince of Peace, described in the ancient Jewish scriptures.

2. Jesus claimed to be THE SON OF GOD.  His parable of the vineyard shows clearly that he thought of himself as the only Son of God, God's final messenger, not simply another of the prophets, and the heir of Israel.

3. Jesus claimed to be THE SON OF MAN.  Jesus refers to himself this way over 80 times in the gospels.  It's a clear reference to the "son of man" in an ancient Jewish prophecy in the book of Daniel.  One who ultimately rules over everything and everyone (Daniel 7:13-14).

With these three titles (and in many other ways), Jesus clearly claimed to be the very God his accusers worshiped... 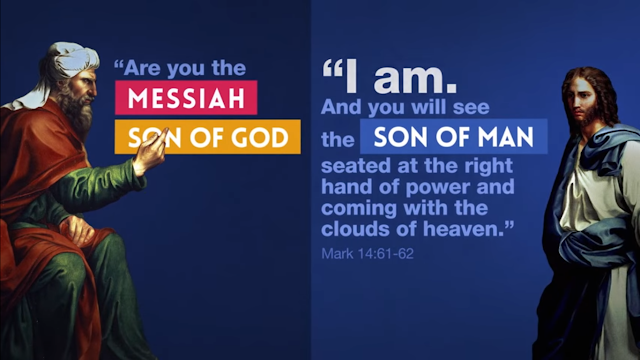 The majority of modern historians, Christian and non, are agreed that the historical Jesus...
Jesus' self-understanding cannot be reduced to that of a Jewish teacher or a charismatic leader.  He was claiming repeatedly and emphatically that he was and is God himself.

1. Are you surprised by the fact that most modern historians, Christian and non, are confident, not only of Jesus' existence but also quite a bit about what he said and did?

2. Are you surprised that Jesus claimed to be God?  Why or why not?

3. How could Jesus be SOMETHING GOOD but NOT GOD if he was someone who kept claiming to be God?  Why would someone who is a good person but not God, keep insisting they are God until they were killed for this claim?

5. What if it's true that God has shown up in human history so that we might really know him?  If it's actually true, what would you say to God about this?

Back to Zangmeister Reasonable Faith Videos
Next video: 10. Did Jesus Rise from the Dead? - Part 1: The Facts