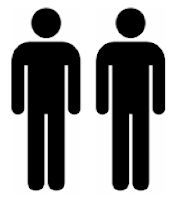 Paul has been explaining how the death of Jesus has made people right with God.  This leads him to reflect back to how the problem of sin got started and to draw some links between what Adam did and what Jesus has done...

The first man is Adam.  In Genesis we read that God made people good and gave them freedom to choose to love him back in obedience or to go their own way and rebel.  They went against God and this brought consequences for all humankind from that point on: guilt and shame, work became toil, pain, struggle and ultimately death and separation from God (Genesis 3).  Humankind was (and still is) in rebellion against God, sinning by nature and by choice.

Paul reminds us that the purpose of the law given to the Israelites through Moses was to show sin up more so we could know just how bad we are and how far we've fallen from God's standards.  But it also goes to show just how gracious God is when he came to die in our place for our sin so we could be brought back from death to life.

Questions...
1. What are the main points of Genesis chapters 1-3, whether you take it literally or not?
2. How good is God?  How bad are we?  How does the law help us?
3. Are you following the first man or the second?  What does Paul say the consequences are for you?