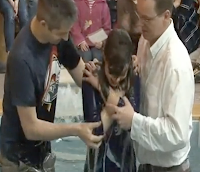 If sin is fun and grace is free then why stop sinning?  Paul says that's a ridiculous thing to ask for anyone who really knows Jesus...

Paul is saying that a Christian is someone who has died.  The death of Jesus now also represents the death of their old sinful self with all its selfish priorities and desires.  The Christian is someone who realises the seriousness of sin and sees that it leads to death.  They also enjoy the incredible forgiveness and freedom that God's grace through Jesus brings.  For someone like this, who realises the seriousness of sin and experiences the joy of grace, the idea of wanting to continue in sin is absolutely ridiculous.

For the Christian, they also have the Holy Spirit - God himself living in them and this means they have the power to make the right decisions and to live for Jesus.  Before, they were slaves to sin and helpless to stop but now, they have God himself and all his power at work in them to change them day-by-day to be more like Jesus (v6-7).

Paul describes some of the symbolism that's involved in believer's baptism.  When Christians go under the water and come up again, they're identifying themselves with the death, burial and resurrection of Jesus.  The water is just water but it's packed with meaning for the person being baptised.  It's a sign that they have crucified their old selves (Galatians 5:24) and it's a sign that just as Jesus came back to life, they too live a new life - not one centered on themselves anymore but on Jesus instead.  Living 'with him' (v8) is something that starts now as well as continuing forever in heaven.

Paul's advice for Christians is to count themselves dead to sin, dead to its leadership and mastery and instead to live full lives for Jesus, led by by him.  The forgiveness and freedom that Jesus brings to Christians is not what's in question here, only the extent to which Christians make the most of that freedom to live large lives for Jesus rather than small selfish lives for themselves.

Questions...
1. Are you dead to sin and alive to Jesus yet?  If not, what do you make of the idea here that you're a 'slave' to sin?  How long could you go without thinking, saying or doing something selfish?
2. If you are dead to sin and alive to Jesus, have you been baptised?  If not - what are you waiting for?  If so, how is your life and your choices showing people what Jesus has done for you (like your baptism did)?