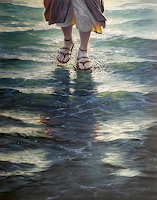 The action never stops as Mark uses that word 'immediately' again and we're off...

Jesus - the man who is God - still needs time alone to pray (v46) and we see again that he draws all the strength he needs from his relationship with the Father.  And the implication for us is clear: If Jesus needed to pray and spend quality time with God, what hope do we have of living the life he has for us if we don't do the same?

I love how 'matter-of-fact' Mark is in verse 48 when he says Jesus walked over to the disciples on the lake.  It's no big deal at this point for Jesus to walk on water instead of going through the bother of finding a boat.  Mark wants us to think, 'So Jesus is walking on water now is he?  Sure!  Why not?'  After all we've seen from Jesus in Mark's account so far, we shouldn't be surprised.

It still comes as a bit of a shock for the disciples though.  Mark says they were terrified when they saw Jesus walking on the water (v50) and he says they still hadn't really grasped Jesus' power because their hearts were hardened' (v52).  Surely the disciples of all people would be getting it by now but apparently not.  And the same thing happens today.  People who should really know better, after all God has shown them in their lives, still doubt him.  People who've seen miraculous healing, seen evidence for the resurrection of Jesus, seen the order and extravagance of this universe, still doubt God and come up with alternative explanations.  It strikes me also that these alternatives naturally lead to the same reaction the disciples had when faced with the unknown - fear.

When Jesus and the disciples reach their destination, people know who he is and they bring loads of people to him to be healed.  And people who know Jesus today are still doing the same.