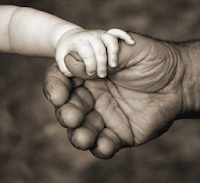 Jesus moves on again and his growing reputation continues to bring crowds and now a desperate plea from a synagogue leader...

At least two people in this passage because of their faith, have concluded that all they need is the touch of Jesus to heal.  The synagogue leader Jairus, when he asks Jesus to come and heal his daughter says, 'Please come and put your hands on her so she will be healed.' (v23).  The woman in the crowd on the way also had a similar thought, 'If I just touch his clothes, I will be healed' (v28).  Why did these two have such confidence that all it would take was a touch from Jesus?  It's because they recognised that Jesus is far more than just another good teacher.  He's God!

Consider the people later on who say to Jairus, 'Your daughter is dead.  Why bother the teacher any more?' (v35).  They've come to a very different conclusion because of who they think Jesus is.  They haven't realised he's not just 'the teacher' and they don't have the hope that Jairus has.

Jesus says, 'Don't be afraid; just believe' (v36) and he says the same to us today through these accounts of what happened.  It's not the vain 'belief in believing' that many people mean when they say 'just have faith' but it's faith in Jesus, knowing who he is and what he can do.