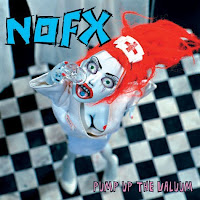 I've been loving listening to 'Dinosaurs will die' by NOFX recently.  Great band.  Great song.  Thoughtful lyrics too about the music industry.

The punk in me loves bucking trends and leapfrogging right over the organised system of things, especially when they're driven by money.  'Underground', 'small', 'personal', 'real', 'honest' - these are all words that appeal to me and I think for good reason but is small always good?  I admit I have a bias towards narrow appeal but what if there was something big that was good - even better than anything or anyone else?

As well as being a punk, I'm a Christian and that means (to start with) that I believe in God - the one who's bigger than any of us and better too.  I believe he's the ultimate and that we can know him personally and live for him and expect big things to happen.  Big but not big because of money or commercial success - just big because it's God and he does things big.

So what's this about?  I'm not sure.  Maybe that I shouldn't always be instinctively against things just because they're big and organised.  We should be more discerning than that.  Maybe when God has anything to do with anything, big budgets might be a part of it and maybe even commercial 'success'?  Who knows?  One thing's for sure though, only the best good things will survive when everything else dies out.  Dinosaurs will die and in the meantime, I'll try not to be so skeptical.