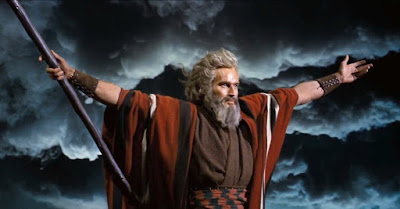 In every flipping film I've seen about Moses (and there are loads!), Moses is always made out to be the hero of the Exodus story - A strong, wise leader, usually with an impressive beard.  But that's NOT how the Bible tells it.  Moses improved as a leader but to start with he was weak, reluctant and surprisingly stubborn when it came to doing what God said...

"What if they don't believe me...?".  It's a fair enough question.  No-one's going to take seriously the guy who says "The bush told me"!  So in the previous chapter God told Moses WHO to say it was that was sending him.  Not a bush, but the great I AM - the God of your fathers Abraham, Isaac and Jacob.  But even though Moses knows it's God speaking, what if the Egyptians aren't convinced?

So God graciously shows Moses 2 amazing miracles that he could perform on demand to prove to the Egyptians that he really did have the power and authority of God behind him.

But Moses is still hesitant.

He makes excuses about not being a very good speaker.  But he's missed the point.  It's not supposed to be Moses' amazing oratory that convinces people but God's power.  That's why God's answer was the 2 miracles and not, "Don't worry Moses.  People will believe you because you do great speeches!"  Moses is slow to realise that God's power will do the talking.

God reassures Moses and shifts his focus from himself to God.  "Who made people's mouths?"  Moses should know this is all about God and what HE can do.

Then it becomes clear that Moses DOES get it but is simply not willing to do what God says.  He's stubborn.  God will use this stubbornness later with Pharaoh but refusing to submit to God is completely inappropriate!!  Moses should know better.  He's defying God.  "I don't want to.  Make someone else do it."  After all the grace God has shown him!  What a stinky attitude!!  And we all do it!

Understandably, God gets angry with Moses (a moment we don't usually see in the films) and effectively God says, "Oh alright then, go and get Aaron and he can help you speak."  In other words God, even in his anger, is gracious again and gives Moses extra help, but he's ultimately uncompromising in his command for Moses to obey him.

So Aaron will do the talking and Moses will handle the miracles.  Again, not what we see in the films.

So Moses is NOT the hero of the Exodus story.  GOD IS!  And you are not the hero either.  God is!

Will you trust him to be the hero of your story...
or will you resist as if it's all about you?

Back to Exodus blog