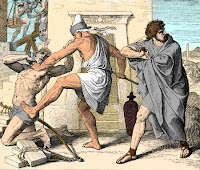 This week I heard that I was unsuccessful in an interview for a job I had.  It made sense in some ways that I hadn't got it but it was something I felt called to and so it was a big disappointment.  Serving full-time in the strategic leadership of a local church is something God has put on my heart to pursue but there's a slight snag - right now no-one wants me to do it!

In this section of the story we see Moses has justice on his heart and a desire to defend the Israelite slaves but the time just isn't right for him to do the big thing yet and he has a long wait in store before any of that stuff happens...

When Moses killed the Egyptian slavedriver, he was doing the wrong thing for the right reason.  His motive was good - he wanted justice for God's people, but sin was right there too and he went about it totally the wrong way.  He needed patience to seek God's will for how to channel the passion he had.

"Who made you ruler and judge over us?"  It's an interesting question because the answer in a lot of ways is, "God actually." It's just not the right time and Moses only has a slight hint of what God really wants him to do.  No clue really.

So Moses ends up having to run away from home because his dad wants to kill him (so not the best home!) and he decides to live in Midian.  How would Moses have felt as he set up a new life there?  He must have been fuming about the injustice God's people were facing and the limitations on him to do anything about it.  But he is able to defend a group of girls against some shepherds.  Moses hasn't lost his strong sense of justice.  And this event leads to him getting married, having kids and settling down in Midian.

The passage tells us it was a "long period".  Moses no doubt still had a desire for God's people to be free but he knew he was powerless to do anything about it.  So instead he settles down in Midian and learns to faithfully obey God as a husband, dad and shepherd.  God has so much more for Moses to do but it's not yet.

What do you long to do for God in the future?  What does it mean for you to be faithful in the things God has you doing now?