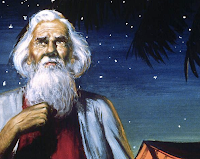 So far Paul's explained the bad news that no-one's good enough for God and the good news that people can be made right with God only by putting their faith in Jesus.  But he knows that his Jewish readers are going to find this hard to accept because they think they're sorted already and the same is true of many people today...  "How dare you say I'm not good enough and I have to be a Christian!"  It's an understandable objection and many of Paul's Jewish readers would have also added, "But we're from Abraham's family and he didn't have faith in Jesus so why can't we just carry on as Jews?"  In the same way, many people today think they're just fine as they are.  In this chapter, Paul explains that Abraham was made right with God in same way that people are made right with God today - by believing him!

So how were people made right with God before Jesus came along?  Abraham is a hero to the Jews but he didn't even know Jesus.  If Abraham was right with God, it must have been because he was really really good!  Paul says no.  Abraham was no better than the rest of us compared to God (and anyone who reads Genesis 12 onwards will see just how flawed and normal he really was).  Not even Abraham could say he was good enough for God or that God owed him anything.

Paul says that Abraham was made right with God as a free gift of God's grace.  As he's explained already, it's not about self-righteousness that relies on our works but 'gift-righteousness' that relies on God's work for us.  The faith that Abraham needed in order to believe God, is the same kind of faith people need today to believe God.  It's just that God has said and done a lot more since Abraham, most importantly through Jesus himself...

Hebrews 1:1-2 says... In the past God spoke to our ancestors through the prophets at many times and in various ways, but in these last days he has spoken to us by his Son, whom he appointed heir of all things, and through whom also he made the universe.

So Paul's not flogging the Jews a snazzy new heretical religious fad that will come and go.  It's the same faith and it's the same God.  It was never about good works that earn God's favour.  Paul says being right with God is a 'blessing', which means it's a gracious gift and not something that anyone can ever earn, not even the Jewish hero Abraham.

Many Jews had missed the point.  Some would have argued that it was all about circumcision but Paul says that's just a sign that Abraham had been blessed by God already.  It was a sign that Abraham belonged to God because of God's grace, not because of anything Abraham did.  To the Jews that thought they were God's just because of their heritage or religious practices, Paul says, 'You're wrong!'  Belonging to God and being made right with him (justification) has always been and will always be about believing what he says and critically, now that Jesus has come, this includes trusting and following him.

How many people today miss the point and think that what really matters to God is head coverings or facing east or circumcision or beards or sideburns or kneeling?  How many Christians miss the point and think that God loves them because they pray or go to church or read the Bible or sing worship songs?  Some of these things may be helpful but none of these things can make us right with God.  Only God can do that and he's done it for everyone who trusts and follows Jesus who died in our place for our sin and came back to life.  It's about believing God and it always has been.  This is what faith is all about.