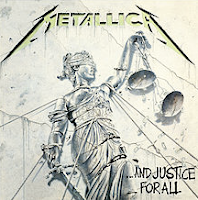 So Jesus goes on trial again, this time before Pilate.  But justice is the last thing on people's minds...

The religious leaders aren't happy with Jesus and they're desperate to find a decent reason to kill him but so far they haven't been able to.  No-one had.  On one occasion, Jesus even challenged people saying, 'Can any of you prove me guilty of sin?  If I'm telling the truth, why don't you believe me?' (John 8:46).  They hope that by taking him to Pilate (the local Roman authority), they'll be able to get him sent down somehow.  If they can stir up the crowd enough, Pilate just might have him killed just to avoid the hassle.

Jesus doesn't defend himself and Pilate can't find anything wrong with him.  He'd like to let him go and he knows that would be the right thing to do but he's scared of the people.  He doesn't have the guts to do justice as a leader so he lets the people decide instead.  He invites the crowd to choose one of two people to be released: Jesus - a man with no solid evidence to suggest he's done even the slightest thing wrong, or Barabbas - a murderer with no shame about it.  Pilate hopes they'll make the obvious choice but they don't.  The religious leaders have done their job well and got the crowd so stirred up about seeing Jesus killed that that's all they care about.  The crowd shouts loud enough and Pilate gives them the final decision. Jesus - the innocent man, will die because that's what the people want.

The Roman soldiers drag Jesus off, mocking him and his so-called kingdom and beating him as they go.  Jesus is meant to be a king but what kind of king ends up this way without a fight?  Yet for Jesus, this IS the fight.  Hundreds of ancient prophecies have pointed to this.  Jesus is called the 'lamb who was slain from the foundation of the world' (Revelation 13:8).  In other words, this has been God's plan since the beginning.  He will get his justice AND save billions of lives in the process!  It's all about to kick off!