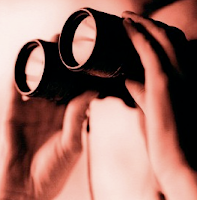 Jesus has received a bit of a grilling.  Now it's his turn to ask questions and teach people.  He opens their eyes to himself, the religious leaders and a normal lady no-one cares about.  It's stunning stuff...

Jesus points out something about himself.  People at the time were expecting the Messiah - the one prophesied about throughout their history that would come from God and rescue them once and for all.  Jesus is helping them see that this Messiah they're waiting for would be God himself (which is why David could call him 'Lord') but also from the human line of David (which is why the title 'Son of David' is used).   He's hinting at the fact that he is the Messiah: the God-man.  Jesus is fully human and descended from David's family line but he's also fully God.  He's getting the people to look more carefully at what kind of Messiah they should be expecting.

Then Jesus gets people to look more carefully at their religious leaders.  They look important, honourable and close to God but Jesus sees them for what they really are: hypocrites.  They won't get away with it in the end.  It's not about religion.

Next, Jesus gets his disciples to look carefully at the rich people making big offerings and one lady who gives a small offering but it's all she has.  He's saying, 'It's not about the rich, it's about people who love God.'  It's not about money.

So Jesus is getting people to look at things more carefully.  They should be looking for a Messiah who is God himself and also from the line of David.  And they shouldn't assume the Messiah will favour the religious or the rich.  God's more interested in people's genuine love for him than in their money or their religion.  This is only the beginning of what he wants them to understand about himself.