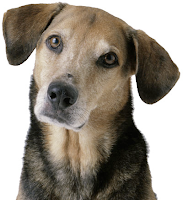 If I walked up to a girl and called her a dog, I'd most likely get a slap in the face!  But in this next encounter that Mark shows us, Jesus gets away with it!  What's really going on here?

So is Jesus really adding insult to injury by not only turning her down but calling her a dog too?  I don't think so.  There's a lot more going on than we might realise...

A quick biblical history lesson... All the way through the Bible, God had been dealing especially with the Jews because he chose to make Israel his special people.  It's not that they were any better than the other nations but he wanted to bless them so they might be a blessing to the whole world.  This was the plan all through the Old Testament part of the Bible since Genesis 12.  As it turned out, Israel weren't particularly obedient and so there wasn't much blessing to be shared with the world and instead, things went steadily downhill.  God knew this would be the case and had something bigger in mind all along - Jesus!  So when Jesus finally does turn up, it shouldn't be surprising that he gives the Jews first dibs on his kingdom, since they have been God's chosen nation for ages.  Jesus' kingdom is for the gentiles (non-Jews) too but he's starting with the Jews first in order to honour the commitment God made to them in the Old Testament.  God's plan had always been far bigger than the nation of Israel but it did start with them and so that's why Jesus starts with them.

So when Jesus is initially reluctant to help the gentile woman at this point, it's not because he doesn't love her but simply because he's not on that part of the plan yet.

In verse 28 we see the woman's impressive response.  It's impressive because she knows she deserves nothing from Jesus and yet she has such strong faith that she asks anyway out of desperation and the hope that Jesus will have mercy on her.  It also shows that she knows Jesus can help if he wants to.  She has faith in who Jesus is, what he can do and faith enough to plead for mercy from him.  She sees things pretty clearly and Jesus loves this so much that he jumps ahead with the plan and helps her anyway, even though she's a gentile.  It's a glimpse of the fact that Jesus' kingdom is for everyone and it's this kind of faith that he's looking for.

When you don't understand God's timing or his plans, what kind of faith do you have?  Are you someone who decides God must be dead, or wrong, or unloving?  Or are you the kind of person who realises we're all undeserving and the best option is to acknowledge God and beg for mercy?