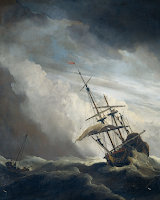 Mark continues his account.  Jesus again demonstrates his power but this time it's nature that submits...

It's worth noticing that it was Jesus' idea to cross the lake (v35), so it was a journey he initiated and was confident of finishing.  This is something big that we learn about Jesus from elsewhere in the Bible too.  He finished his plan to defeat death on the cross (John 19:30), he's the pioneer and perfecter of faith (Hebrews 12:2) and he will finish the work he's started in his people (Philippians 1:6).  In other words: Jesus finishes what he starts!

The contrast between Jesus and the disciples in verse 38 is dramatic.  Jesus clearly isn't worried about (or even aware of?) the storm whilst he sleeps peacefully 'on a cushion' (love that detail!), whereas his followers' reaction to the storm lead them to conclude that they have almost no hope of survival!  Jesus knows better and they should too, especially after all they'd seen and heard so far.

Then the miracle.  Jesus tells the storm to stop and it immediately stops (v39).  That's it.

Jesus lovingly tells his disciples off for not trusting him more (v40).  After all they've seen (driving out evil spirits, healing many people instantly and obviously, forgiving sins and proving it with miracles and loads more), they "still" (v40) don't get it.  In fact, the knowledge and experience of Jesus they've gained so far lead them to fear Jesus rather than trust him at this point (v41) and Jesus is disappointed... but patient.  He doesn't ditch them.

In the end, the disciples asked an important question, as everyone should in response to what can be known about Jesus: 'Who is this?'  Intellectual apathy or indifference would have been a ridiculous response and it still is.  Jesus' actions had left them with only two options: fear or faith.  They had to keep following him, finding out more and trusting him to lead.  And so do we!