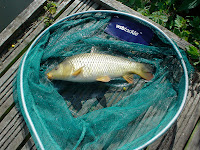 Dropping what you're doing to do something else can be an easy thing to do.  For instance, right now I've dropped redecorating the bathroom to write my blog (well actually I haven't even started the bathroom yet but I will later on, I promise!).  Other times, it's hard to get me to drop something, like when there's music on and Chrissi's trying to say something to me!

The people in this next bit of Mark drop everything to follow Jesus and it's quite ridiculous, weird and brilliant...

Mark skips right through a few things that the other gospel writers (writing later) spend more time on.  He mentions the baptism of Jesus where the trinity shows up (voice of the Father, the Son in the water and the Spirit on his shoulder) and the big public confirmation of Jesus' identity is there for all to see.  Jesus then heads straight off 'at once' (one of Mark's favourite phrases for moving things on swiftly in his gospel) and is tempted by Satan (again the other gospels mention more on this).  Mark spends little time on the launch of Jesus' ministry and gets quickly to the action he's excited about...

It starts with a message.  Jesus is telling everyone about the good news of God's kingdom and that this kingdom (and God himself) has drawn near to them.  It's a special time and they shouldn't miss it!  He tells people to ask God for forgiveness, turn from their selfish ways and follow him.  This is not the message of someone who's trying to just be nice, kind and a decent teacher of life lessons.  Nor is it an optional take-it-or-leave-it adventure for those who've got nothing else better to do.  This is an urgent rescue mission to a world drowning in sin and Jesus is shouting to everyone to grab the only rope they're being thrown.  Jesus is all about himself and inviting people to follow him.  He's absolutely self-centered, which can only be a good thing if he is who he says he is.

And then we get to Simon, Andrew and then James and John.  They're busy at work (fishing was their living) and Jesus (who they've probably never met) tells them to follow him... and they do!  We need to stop and realise what a weird moment this was.  They're basically leaving their work and family behind at the drop of a hat because of a stranger who tells them to!  It doesn't make much sense at all unless God was involved and he was convincing them of the urgent need to follow this 'Jesus'.  I think that's what must have been happening.

The situation isn't much different today.  There's still a world full of people who desperately need God's forgiveness and it's still a matter of life and death.  There's still the message of good news about Jesus and an invitation to be part of God's kingdom.  And every day there are still people who have a 'God moment' where they drop what they're doing, realise the good news is true and start following Jesus!

What have you done with this invitation from Jesus to follow him?

If you feel you need to know more before you decide then keep reading Mark's gospel, see what happens next and ask me anything you like along the way.

If you've said yes to this already, are you still putting him first in everything you put your hands to or are you wasting your time 'trying to catch fish'?