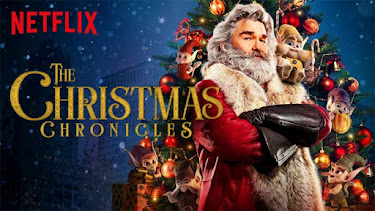 1. PLOT.  What happens?  Are there any plot twists (surprises)?

There's a sister and a brother.  The brother is quite mean and rude.  One day they see Santa because their mum's gone out and they're being a bit cheeky.  They are staying up all night seeing if Santa would come.  When Santa comes the little girls climb up into the sleigh and her brother follows her.  They crash Santa's sleigh but in the end they end up fixing it with the help of some elves.

2. CHARACTERS.  Who are the main characters?  Who was your favourite character and why?

The main characters were Santa, the elves, the sister and brother and their dad and their mum.  One of the characters (an elf) reminds me of my sister.  The elves are my favourite because they're really cheeky and they're really funny.  One of the elves eats candy canes all the time and he got one stuck on a page of a book and when Santa notices it he says, "Oh, why are they candy canes?" and the elf says, "Whoops!  I can't help it!  Sorry!"

3. Your OPINION.  Did you like the film?  What was your favourite part and why?

The CHRISTMAS CHRONICLES is a good film because it's quite funny and it's got lots of funny bits.  It has songs too.  The brother learned to be kind because Santa taught him that he needed to set a good example for his little sister because their dad died (by saving a random person in a fire).

4. RECOMMEND.  Would you recommend this film to a friend?  Why or why not?