Ok, this one is an argument that I find slightly more convoluted, but if you're happy to jump inside a philosophical thought experiment for a moment, it does make very good sense.

In 1078, a Christian monk from Canterbury called Anselm argued that:

Actually, as with all good philosophy, I think this argument has some common sense thinking in it that is fairly intuitive when you stop to think about it.

So hang in there!  The video unpacks it for us...

This argument is mainly about the essential nature or definition of God.  God by definition is a "Maximally Great Being", (nothing greater than God) and is ESSENTIALLY:

So if we're talking about something that fails to be one of these things, then we're not talking about "God" any more, by definition, but rather, something less than God.

If this argument is sound, the atheist would have to show that it is IMPOSSIBLE that God exists, because the concept of God isn’t logically incoherent or self-contradictory (like a square circle).

It's a little bit like saying that God, by definition, cannot NOT exist!

1. Do you think it's at least logically POSSIBLE that God exists?  God being:

Is God an intuitively coherent idea (unlike a square circle or a married bachelor)?

If so, this argument says that God ACTUALLY exists.  What do you make of this logic? 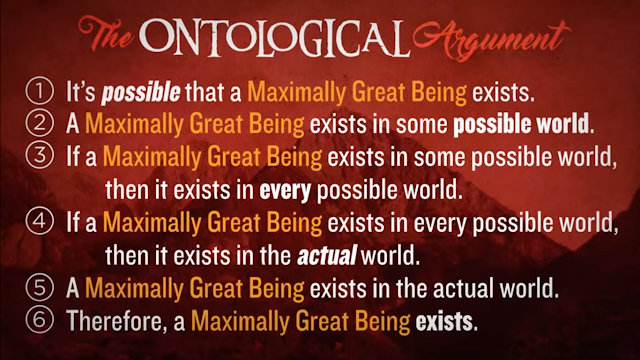 3. If the notion of God (as described in this argument) is intuitively coherent and God possibly exists, then it follows that he cannot fail to exist (or he would not be God).  In other words: God essentially exists!  And if anyone says he doesn't, they're talking about something less than God.

Agree or disagree?  Why?

Back to Zangmeister Reasonable Faith Videos
Next video: 7. Suffering and Evil: The Logical Problem