Santa is not real! 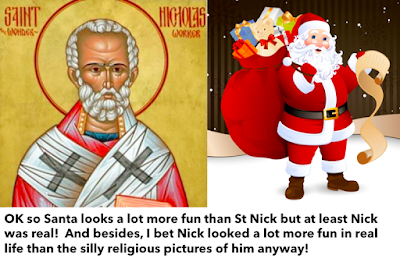 Every Christmas I'm reminded that so many parents think it's ok to lie to their kids and make them believe in someone they know doesn't really exist. It's fun to pretend but if the parents are the only ones who know the truth - it's lying.

In my family, we do Santa stuff but it's fun because the kids are in on it. We want our kids to know the truth, especially because the truth is way more exciting than the lie anyway. Why shouldn't kids know that at Christmas their families buy them things because they love them and the Santa thing is just a pretend thing people do for fun?

Our kids know that Santa is pretend.  They also know that most kids don't know he's pretend and that it's up to their parents to choose to tell them the truth. It's a minefield though. Just because we don't want to lie to our kids.

Christmas was started by Christians who decided to hijack a pagan festival that hurt people and celebrate Jesus instead. "Christmas" means "Celebrating Jesus".  A friend of mine used to say, "Christians stole Christmas from the world and today the world has stolen it back." He's right.

Even Santa started out as a Christian - a generous Christian called Nick (who IS real). Now Santa is fat from pies, red thanks to Coca-Cola ads and brings us all the stuff we want! If we really wanted to venerate jolly old Saint Nick, how about giving generously to the poor and asking nothing for ourselves?

And for Christians who get their kids believing Santa is real - What do you say when they find out the truth and ask, "What about Jesus? Did you make him up too?" Why should they believe us?

I know it might all sound very "humbug" because it's a bit of a rant. I just think the truth is way more exciting and if we're parents, we really miss an opportunity to love our kids if we let them actually believe in Santa. It's fun to pretend but only if the kids are in on the fun.

And don't worry - If your kids know our kids and your kids believe in Santa, your secret is safe with us!

Merry Christmas, however you celebrate it!