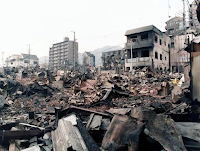 Today we're taking on the whole of Mark chapter 13.  It's a lot more than usual but it's all about the same thing and so it makes sense to read it all at once and notice some of the important things Jesus is saying about his return.  It has been said that Jesus is either mad, bad or God.  His words in this chapter cannot be the words of someone who is simply a nice man or a just a good teacher.  Jesus is either sincerely deluded, deliberately lying or absolutely God...

As they leave the temple and his disciples marvel at all the buildings, Jesus says they'll all fall.  In fact, the temple in Jerusalem was destroyed by the Romans in 70AD but Jesus is talking about the unraveling of all this world's rebellious power that will take place before he returns (v1-2).

When his disciples question him further about the 'end', Jesus describes a number of things that will happen before he returns...
About his return, Jesus says it will be mercifully soon (v21), in great power and glory (v26) and that his angels will collect his people (v27).  Whilst Jesus is clear that his followers should look for these signs of that time (v28-29), he doesn't want them to calculate it exactly because that's not the point (v32).

There is much in this chapter that could be confusing but the main points are clear...
Mark blog

What is the 'abomination that causes desolation' (v14)?