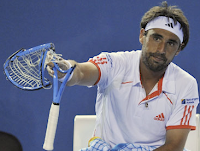 James and John - also nicknamed the 'sons of thunder' (Mark 3:17) are as bold as ever, pretty much demanding that Jesus give them the most powerful positions in his kingdom.  They've completely missed the point...

Jesus' kingdom isn't about power - it's about serving.  James and John haven't figured it out yet.  Jesus has come to serve the world as only he can by dying in people's place and defeating death on their behalf so they (and we) might have forgiveness and friendship with God (John 3:16).  This is what Jesus' kingdom is built on.

Jesus knows the kind of death he's going to have to endure and this is what he's hinting at with the 'cup' and the 'baptism' he mentions.  Later on in Mark's account, we'll see Jesus faced with the cross and again using the image of the 'cup' to describe what lies ahead (Mark 14:36).  James and John don't really know what they're asking and yet Jesus knows that they too will end up facing death for trusting and following him (v39).

The anger of the rest of the disciples seems to demonstrate they too had missed the point.  Maybe they were all hoping for power too and were gutted that James and John had the audacity to ask for it first.  Jesus explains to them that his kingdom is about serving, not about power and if they want to follow him, they need to realise it.  He's not here to rule in power but to die in humility and humiliation to pay the price of humanity's rebellion against God (v45).